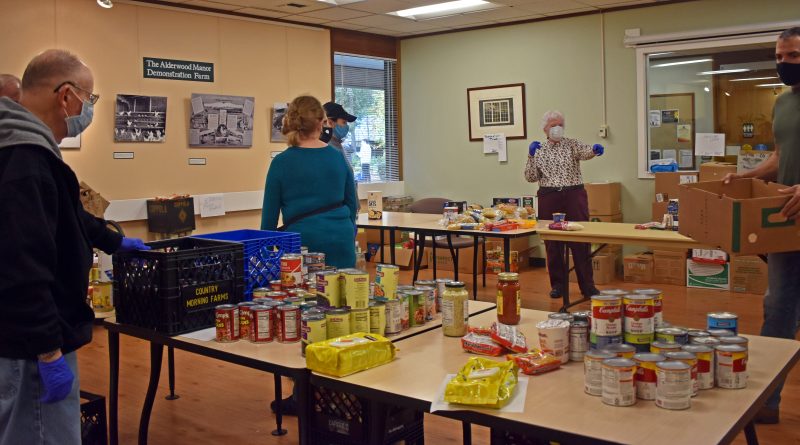 To support vulnerable veterans through the existing pandemic, the Hero’s Café and Lynnwood Senior Center held a community donation drive at the Senior Center.

Within just one hour, the donation sorting tables were packed with donated non-perishable food items and personal care items.

Donations were distributed amongst those who identify as present and former members of the Armed Forces visiting the Lynnwood Food Bank, Edmonds Food Bank, and Sebastian’s place. Boxes were also prepared for donations by Hero’s Cafe and Senior Center staff, to support those contacting them.

Gary Walderman, Director of the Hero’s Café, a social space for active duty and veterans, says he began receiving calls about the pandemic’s impact and the need for access to meals.

Walderman says that he is thankful to the Lynnwood community for their remarkable support of the drive and the veterans in the community.

“The elephant in the room was how successful this was going to be,” he said.

Like many local businesses, Hero’s Cafe temporarily closed its doors with the onset of the pandemic. It has been closed since March.

When Mary-Anne Grafton, Recreation Supervisor at the Lynnwood Senior Center discovered Hero’s Cafe’s plans to hold a food drive for veterans, she wanted to be involved to support those who have served in the community.

“I’ve been down to Hero’s Cafe and when you go into a room of one hundred people that are there together, I know what a loss that was to the community when those doors had to close.”

Veterans, their spouses, and surviving spouses are some of the Lynnwood Senior Center’s more frequent visitors. Partnering up with a veteran’s service provider enabled the center to directly make an impact in its community while providing means for other community members to do the same.

“One of the things I love about Lynnwood is that there are amazing community members here, building a really warm and welcoming community, said Grafton. “It is amazing.”

Bernie Sanders takes the meme-world by storm on Inauguration Day

Encampment cleared: Thursday’s sweep marks the second in one week