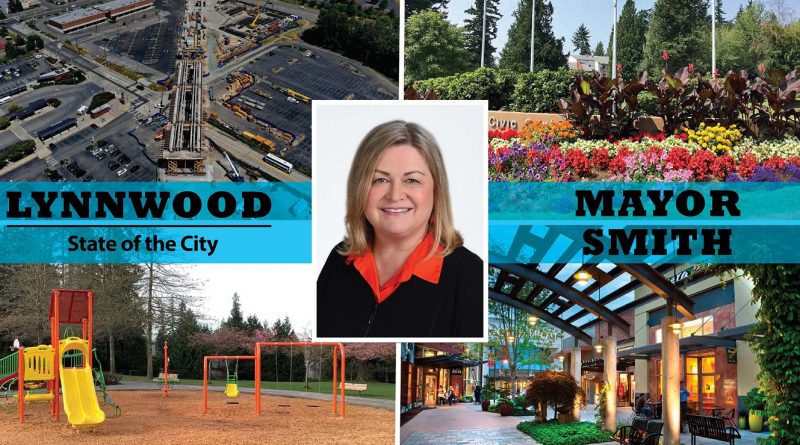 Mayor Nicola Smith, in her State of the City address on the morning of January 27, looked back at how the challenges presented in 2020 produced plans for 2021 in Lynnwood, including new economic development, infrastructure projects, and community equity and engagement.

Lynnwood City Council President George Hurst began the event, addressing how 2020 was fueled by a pandemic that induced both health and economic crises, and in turn, created great challenges within the community.

“The pandemic continues in 2021 and we will continue to have financial challenges. The fear of eviction will not disappear, businesses will struggle to survive and the demand for equity and justice for our diverse population will not be satisfied by superficial political promises,” Hurst said. “Still, I have hope for a better future in 2021. I believe the Mayor; the City staff and the City Council all want the best for Lynnwood.”

“2020 was a challenge, to say the least,” Mayor Smith began. “We were impacted by the global pandemic which has threatened our health and economy, we’ve witnessed political turmoil and acts of violence that have threatened our democracy, we’ve seen racial injustices and inequities brought to a national spotlight, and we have been impacted by the chaos this last year has brought upon our nation. Through all of this struggle, I see hope… 2021 brings new hope on the horizon.”

Lynnwood State of the City Address

Mayor Smith then moved into the city’s strategic plan, including a continued dedication to fulfilling the community vision for the City Center and Lynnwood Link Lightrail. Sound Transit’s link extension is anticipated as a major catalyst to the growth of the city, says Smith. Construction has commenced on the city center station and parking garage.

In 2021, Sound Transit will begin the planning of the city of Everett’s link extension, the next chapter in linking the region together via light rail, says Smith. The design of the Community Transit Orange Line Bus Rapid Transit has also been approved by the Lynnwood City Council and a development agreement between the transit and Lynnwood has been approved by the council to move this project forward.

With large transportation projects in the works, the City Center is taking shape, and with the completion and continued construction of apartment buildings and hotels- that vision is now becoming a reality, she continued.

“Our vision for City Center is a vibrant central core with mixed-use residential and commercial space that is easily accessible by pedestrians, bikes, and cars,” Smith said.

A 19-acre mixed-use development agreement dubbed Northline Village is completed, with the design expected to transform Lynnwood square into space for the community to live, work and gather adjacent to City Center Station through new opportunities in retail, entertainment, office, living, gathering places, and community parks.

Additional development of new construction and improvements will commence, finalizing the City Center’s transformation, as well as outside of the area such as additional multi-family housing, dining, and retail.

Mayor Smith also said that with an anticipated influx of new residents and commuters, the city is following its Economic Development Action Plan, to diversify the economic base, identify opportunities to grow mixed-use centers, and accommodate new retail trends.

Throughout the pandemic, while the city has been working to support current businesses, Mayor Smith revealed that many continue to struggle. She anticipates full recovery for the local small business community will take time. Lynnwood is committed to cultivating a strong business climate and fostering economic growth, says Smith and will examine its processes and culture to ensure financial stability and economic success.

“Our city is making some major investments to improve and upgrade our critical infrastructure so that we can maintain the quality of our systems and also accommodate for growth,” Smith said.

In 2021, several projects will or have already wrapped up. The city has already completed the 36th Ave. W Improvement Project, adding a roundabout, an additional signaled intersection, sidewalks, bike lanes, improved irrigation, and landscaping.

New emergency shutoff valves have been installed in Lynnwood’s water tanks.  In the event of an earthquake, water can be preserved.

“Our city continues to train and prepare for all types of disasters through our Emergency Operations Center, or the EOC, and the staff assigned to respond during major events… this team has been getting real-world experience, responding to our COVID pandemic.”

Mayor Smith said that the city of Lynnwood remains committed to being safe, welcoming and livable for all, sharing that local leaders have committed to using an equity lens in community improvement and interactions.

“As your mayor, I am fully committed to creating a more equitable city, and I am joined in this work by our city council, our chief of police and department directors, and our city staff. We are committed to increasing equity and removing barriers that people may experience as they attempt to access city services, participate, and live their lives as members of this community,” Smith told attendees. “We will continue working to integrate equity into everything that we do.”

To further equity in the community, Lynnwood was the first city in Snohomish County to join the Government Alliance on Race and Equity (GARE), a nationwide organization advancing racial equity in local governments. The Lynnwood GARE cohort, nicknamed Team REAL (Racial Equity Advancing Lynnwood) has created a Racial Equity Action plan to apply anti-racist learnings to policies, procedures, and projects within Lynnwood.

South Lynnwood Park, located within the most racially diverse neighborhood, will undergo major renovations after years of deferred maintenance, said Smith. Additional improvements are happening throughout the city, including new playground equipment at Spruce Park and Lynndale Skate Park. The city is also working on access improvements to Scriber Lake Park and renovation of the Water Tower at Heritage Park is now underway.

All park and city facilities will also be updated to meet current Americans with Disabilities Act standards.

Mayor Smith then applauded the Lynnwood Police Department’s refocused approach towards a community-policing model and its efforts to diversify sworn-in officers, integrate social workers, and the partnership with Community Health Center to reduce recidivism and improve healthcare for incarcerated people housed in the Lynnwood jail and future Community Justice Center.

“An integral part of being a safe, welcoming and livable community, is the relationship between our police department and the community they serve,” Smith said.

Connecting and engaging with the community

The city of Lynnwood’s state of address commenced similar to how it began, with a recognition of the impact the coronavirus has had on the community, ending with how it reimagined local leaders’ commitment to residents.

Mayor Smith announced that in the face of the global coronavirus pandemic, the city of Lynnwood is turning its focus on community resiliency. The model will help support all members of the community.

“In closing…2020 was without a doubt one for the record books,” Smith said. We will never forget this year. But as we look back, I hope we can remember how Lynnwood faced these unforeseen challenges, that our dedicated employees worked hard to support our community during this time, that community members made sacrifices for the greater good, and that community organizations rallied to support our neighbors in need.”

In an exclusive interview with the Lynnwood Times, Hurst commended the mayor’s State of the City address but shared it lacked a “key component” –  housing.

“She [the mayor] mentioned all the construction we have going on… These are all market ready apartments,” said Hurst. “My concern is that what is being built in Lynnwood is either apartment buildings or 900 thousand to million-dollar homes. And we know homes for the missing middle are not being built in our city.”

Hurst shared that for years housing has been used as a tool for racial inequity and systemic racism.  He would like to see the city commit to a policy in which all income levels can live in Lynnwood.

“This is the key to have real diversity, equity and inclusion in Lynnwood. It is great to have all the welcome stickers, but we need real policies to have all peoples live in Lynnwood.”

San Francisco architect Danial Parolek coined the term “Missing Middle Housing” in 2011, “to define the gap in housing between single family homes and larger condo buildings and to provide resources to enable communities to meet the growing demand for walkable urban living,” according to his LinkedIn profile.

Hurst expressed that this would increase the accessibility of housing to first time homebuyers, seniors who would like to downsize, and/or those with a moderate income by creating inventory for homes 300-600 thousand dollars in value such as: condos, townhomes, duplexes and triplexes, which are currently not being built in Lynnwood.

For Middle Missing Housing to be a reality in Lynnwood, the city council would need to review and change current codes and zoning Hurst told the Lynnwood Times. He shared that developers have told him the zoning in Lynnwood prohibits this opportunity for housing.

“It is something the city council has to look at.  We have to change our zones and codes because there isn’t that much land to develop in Lynnwood.”

Hurst continued that other opportunities for Lynnwood residents would be a tenet-landlord policy that facilitates rental inspection to make sure rental units are up to code and safe to inhabit; and diving into third party utility billing.

“We are finding that City Apartments and Scriber Lake Reserve have a third party managing the utilities…the utility credits are not being passed down to the residents.  We need to look into that.”

When asked if he is considering running for mayor, Hurst told the Lynnwood Times that he has been asked to run but for now he will focus on establishing sound city policies.

“I have been asked to run and I have not decided yet. I have just been elected to be the president of the council and I really would like to focus on getting things going as far as the council,” Hurst said. “The council needs to reassert itself as far as leadership and policy.”