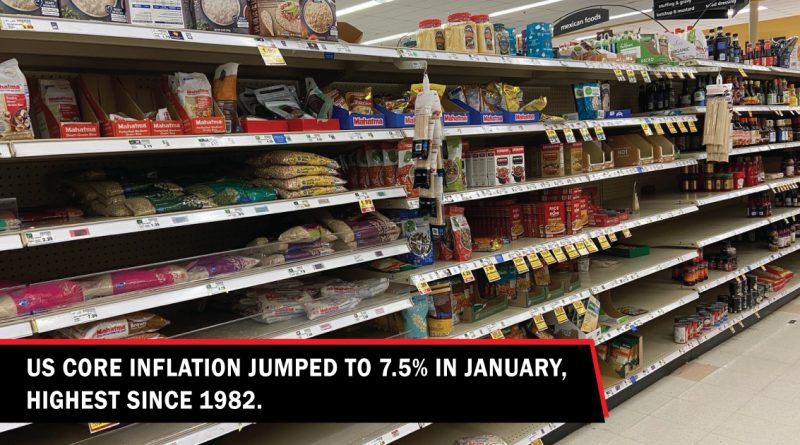 The Consumer Price Index for All Urban Consumers (CPI-U) increased 0.6 percent in January 2022 on a seasonally adjusted basis, the U.S. Bureau of Labor Statistics reported today. Over the last 12 months, the all items index (core inflation) increased 7.5 percent for January 2022 before seasonal adjustment, well above the 7.2 percent expected year-over-year inflation.

Core inflation, the index for all items less food and energy rose 0.6 percent in January, the same increase as in December. This was the seventh time in the last 10 months it has increased at least 0.5 percent. Along with the index for shelter, the indexes for household furnishings and operations, used cars and trucks, medical care, and apparel were among many indexes that increased over the month.

The CPI-U (consumer price index) is the broadest measure of consumer price inflation for goods and services published by the Bureau of Labor Statistics (BLS). It measures the change in prices paid by consumers for goods and services. The methodologies in calculating inflation have shifted over the years – once in 1980s and the other in 1990s. These changes in calculations have depressed reported core inflation now used by BLS.

In the chart below, ShadowStats.com, offers alternatives to government economic statistics for the United States, shows SGS-Alternate CPI estimates based on the methodology which was employed prior to 1980. Many economists argue that this provides an apples-to-apples comparison to core inflation currently calculated by BLS.

The food at home index rose 7.4 percent over the last 12 months. All of the six major grocery store food group indexes increased over the period. By far the largest increase was that of the index for meats, poultry, fish, and eggs, which rose 12.2 percent over the year. The index for dairy and related products increased 3.1 percent, the smallest 12-month increase among the groups.