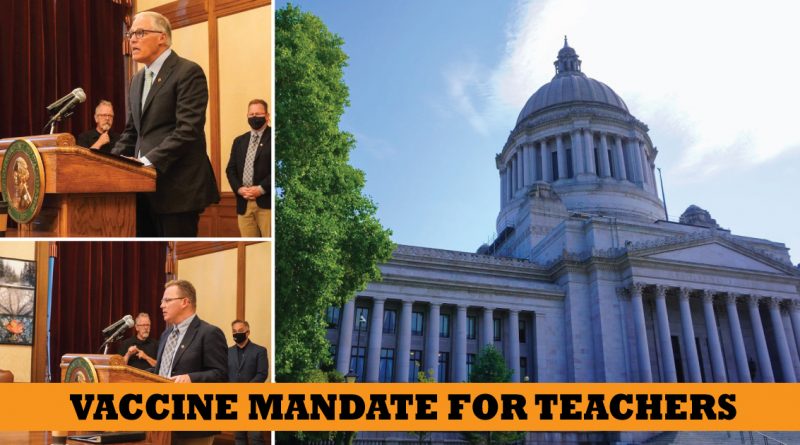 Gov. Inslee stated that, in order to comply with the set date of the vaccine mandate, school employees and volunteers must begin the vaccination process immediately. According to Gov. Inslee, individuals must receive their second shot of the Pfizer or Moderna vaccine, or the single shot of the Johnson and Johnson, by October 4th.

In addition to the mandate regarding vaccines and education, Gov. Inslee also reinstated state-wide mask mandates for the general public. Vaccinated and non-vaccinated individuals will be required to wear masks in an indoor setting beginning Monday, August 23rd.

In the Conference Room

The conference stated at 2:30 p.m. today. It was initially scheduled to take place at Lincoln Elementary School but was moved to the governor’s press room hours before the conference began as a safety precaution for the community surrounding the school. The governor was joined by Washington Superintendent of Public Instruction Chris Reykdal and Secretary of Health Umair A. Shah, MD, MPH.

Gov. Inslee began his remarks by expressing his determination to keep businesses and schools open and keep the economy running. After noting the upcoming school year, Gov. Inslee spoke to the state’s current high infection rates, saying, “The pandemic disease levels are extremely high and exploding across our state, unfortunately.”

Upon voicing his adamant opposition to closing the state down again, he identified these tools against the virus as masks and vaccines — calling them “life-saving measures” and expressing his resolve to increase their use the spread of the delta variant.

“I’m announcing vaccine requirements for adults working or volunteering in K-12 schools,” he says. “As well as individuals employed in higher education, early learning, and childcare. Across the educational spectrum, we are extremely confident this will save lives — save the lives of our employees, and perhaps most importantly, saving lives of our children.”

The governor concludes listing these new requirements saying, “We estimate that this will impact about 118,000 workers in licensed and early-development childcare programs,” as well as an estimated “90,000 staff faculty and graduate students and other [higher education] employees.”

The official press release from today’s conference is available at governor.wa.gov.

The Rationale for a Vaccine and Mask Mandate

Speaking again to the rationale behind these measures, Gov. Inslee said, “these vaccines are incredibly effective,” calling them “medical miracles” that have “minimal side-effects.” Expressing his resolve to not gamble with the lives of students and education personnel, he stated that “these vaccines save lives,” citing how more than 95% of COVID-19 hospitalizations in the state are among the unvaccinated.

Keeping Schools Open is the Priority

Following Gov. Inslee’s remarks, State Superintendent Chris Reykdal addressed the press. Supt. Reykdal threaded his statements with a determination to keep schools open. He first spoke to the urgency of the matter by saying, “we will expect folks to move expeditiously who do not have this unless they qualify for one of the exemptions, religious or medical.”

Before recalling the devastating effects of last year’s virtual school year, Supt. Reykdal reiterated that vaccines and masks are “the best way to keep schools open.”

Cautious yet hopeful, he continued saying, “We are accelerating learning again, and our goal here is safety first and foremost and retaining the opening of our schools and keeping them open. Shutdowns have impacts.”

“To educators all over the state, thank you for the work you’re doing,” he concluded.

Secretary of Health Umair A. Shah also spoke at the conference. Regarding the state’s current status, Sec. Shah said, “We have a serious situation right now. We are seeing a significant rise in cases, hospitalizations, and an increasing proportion — in fact, a vast majority — being due to the delta variant across our state.”

Speaking to the concerning reality of the state’s hospitals, he continued saying, “We are seeing staff shortages, hospitals trying to discharge patients early and divert patients from the care they need because they are simply too full to accept new ones. This is happening throughout our state.”

“This delta variant is a game-changer,” Sec. Shah said. “It is easily transmissible and is leading to the vast majority of our cases.”

Despite many Washingtonians getting vaccinated, Sec. Shah explains how these efforts, though commendable, are still insufficient. “While we were hoping people getting vaccinated would be enough, we have seen a few things happen. Though Washington is one of the top states when it comes to vaccinations in the country, with more than 8.3 million doses given out to more than 4.5 million Washingtonians, and that includes 4.1 million who are fully vaccinated — that’s still not enough people who’ve gotten vaccinated.”

“There are two million people above the age of 12 who have not started their vaccine series yet,” he said. “Now is the time. And those who are unvaccinated are unprotected and are truly helping drive up our serge.”

Sec. Shah also spoke about how the COVID-19 vaccines are safe, pointing to the billions of vaccines that have been administered across the globe. “Just today,” he said, “the Health Affairs Journal released a study, and I would ask you to look at it, where 100 thousand individuals have been saved — lives saved — across the U.S. because of vaccines.”

Gov. Inslee’s directive was petitioned by the state’s Supt. Reykdal earlier this month. Reykdal stated in a letter to the governor on August 12th, “I am strongly encouraging you to issue an executive order requiring all employees working in public K–12 schools to get their vaccination against COVID-19 as a condition of employment.”

Explaining why he believes such a directive is essential, Superintendent Reykdal said, “with the continued increase in cases of COVID-19 across our state due to the highly contagious Delta variant, students losing precious time learning in-person with their educators and peers because of quarantine or, potentially, school building closures is a real threat,” he wrote. “Especially after a year and a half of remote and hybrid learning, a continuity of in-person instruction will be more important this year than ever.” 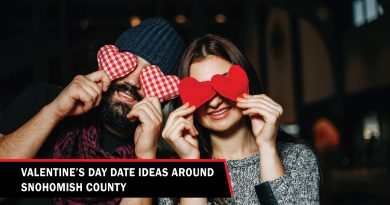 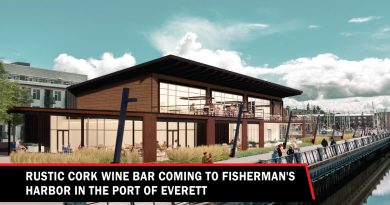 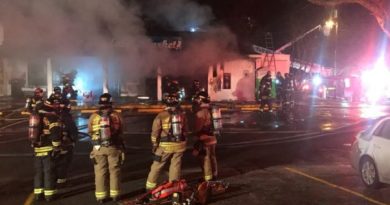 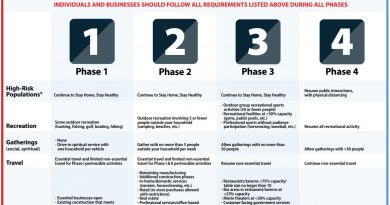 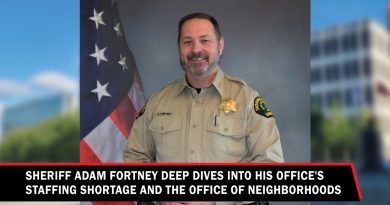 LT podcast: Sheriff Adam Fortney, in his own words