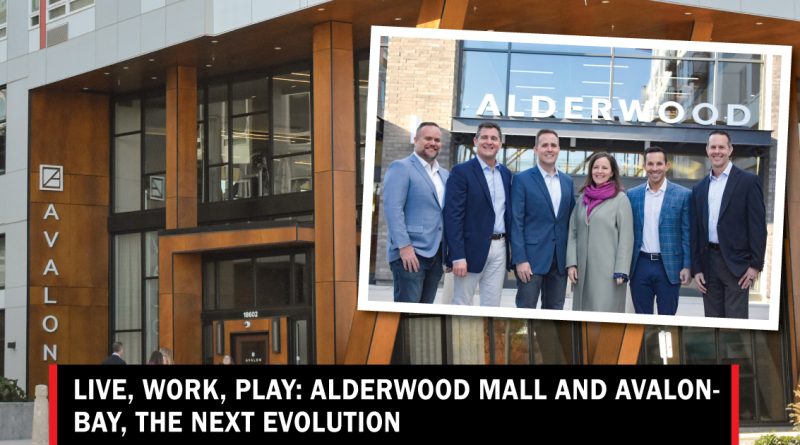 LYNNWOOD, Wash., November 20, 2022—The innovative concept of Brookfield Properties to reinvent Alderwood Mall into a mixed-use shopping and residential experience with the new Avalon Alderwood Place has been an overwhelming success according to Jerry Irwin, Senior General Manager of Alderwood.

“We are really excited about the project,” Irwin told the Lynnwood Times. “It is no secret that the face of retail is changing, and the property has done a great job evolving over the years… We were able to take a department store and transform it into an exciting and vibrant living community.”

Residents will soon enjoy more dining experiences with the Paris Baguette and Shake Shack opening soon at the mall, Josh Deckelbaum, Vice President of Leasing at Brookfield Properties, told the Lynnwood Times. He and his team are curating fitness, more entertainment and additional dining option for the whole family.

“Brick and mortar is alive and well,” Deckelbaum said. “A lot of the digitally native brands have realized they need a presence. Once they have opened in that market, their online sales go up tenfold. We are thriving here at Alderwood and excited about the future.”

Because of the forecasted supply chain issues with home delivery services, Irwin shared that the security of knowing you have your Christmas gift in-hand is an added advantage and peace-of-mind consumers are looking for this holiday season.

“The great thing about shopping here is not only the experience…but you can pick up what you want, take it home, wrap it up and put it under the tree and you know it is there for Christmas Day,” Irwin said.

Opening in September of last year, the thriving 328-multi-family residential community of Avalon Alderwood Place is at 96 percent capacity with several ground-floor retail businesses coming in 2023. The 40,000-sqaure-foot Dave & Buster’s restaurant and arcade opened in August. From job postings on indeed and a statement to the Seattle Times by Todd Hall, planning manager for City of Lynnwood, Dick’s Sporting Goods is also rumored to be opening in the former 100,000-square-foot Sears parcel.

“Alderwood Mall has been around for the last 43 years and has served as one of the major economic engines for the region but it’s no secret that retail is changing, Mike Blank, Vice President of Development at Brookfield Properties, told the Lynnwood Times. “This sort of takes it to that next evolution.”

Brookfield Properties teamed with AvalonBay Communities to redevelop the mall’s East entrance into a mixed-use six story development. The 328-unit property serves as the “front door” to the mall and provides much-needed housing in one of the fastest growing counties in Washington state.

“We’ve paired together the Brookfield expertise with the Avalon expertise to, hopefully, create the next iteration of what does a mall become,” Katie Bucklew, Vice President of Mixed-Use at AvalonBay, told the Lynnwood Times.

Apartments at Avalon Alderwood Place range from studio to two bedrooms with full amenity packages including a full fitness center, an interactive indoor and outdoor lounge area with barbecue, and even a dog park. As far as security, the residential community is a controlled access building with a closed garage and has both mall security and a courtesy patrol available for residents.

The new Avalon Alderwood Place at the Alderwood Mall coincides with the city of Lynnwood’s “City Center” downtown vision as it prepares for growth in the upcoming years, particularly with the opening of the Link Light Rail station in 2024. The City Center vision underwent an extensive planning effort in the early 2000s, that was stalled due to the Great Recession between 2007 and 2009.

Both the Alderwood Mall and Avalon Alderwood Place reside in the service area of Community Transit’s latest innovation to public transportation, the on-demand ride Zip Shuttle. Commuters can book a trip through the GOIN’ – Rides for All app, designate a pick-up and drop-off location, and within minutes, a blue and white Community Transit Zip vehicle will arrive offering easy and affordable access to Alderwood Mall, the library, and nearby multimodal transit centers.

According to the History Channel, the term “Black Friday,” now synonymous with holiday shopping was first coined after the U.S. gold market crash on September 24, 1869. This Friday, November 25, thousands of shoppers are expected to take advantage of the many sales and deals in the stores of Alderwood Mall to begin securing their Christmas gifts for friends and family.

Matt Martin with State Farm Insurance provided some of the following safety tips for shoppers to avoid holiday shopping pitfalls:

Children have the opportunity to tell St. Nick what they want for Christmas and take photos with him every day until Christmas Eve. Pet Night and those requiring a sensory-friendly environment with Santa is also available. Reservations are encouraged but walk-up visits are available as space permits.

China Airlines finalizes purchase for up to 24 Boeing 787 Dreamliners